Eight Excellent Reads! Mystery, suspense, historical fiction, romance, nonfiction, and dystopian . . . a little bit of something for everyone.

Wisconsin author Sara Dahmen has penned a series of book set in the fictional Dakota Territory town of Flats Junction. (I’ve been lucky enough to read some of these books in their beta form—so I know what’s yet to come, and let me tell you, it’s excellent storytelling!) You can check out the series website HERE. So far there are two books released.

This book has a wonderful and rich cast of characters (some who will recur in the following books). You’re rooting for everyone from the very beginning, through heartbreak and tragedy we’re on the journey with them. I loved the details of the tinsmith trade, including the illustrations and definitions at the back of the book. This attention to detail makes all the difference for the reader. I was not surprised to learn that the author is a tinsmith/coppersmith herself. I love learning new things through story—and what a heartfelt, lovely story it is! 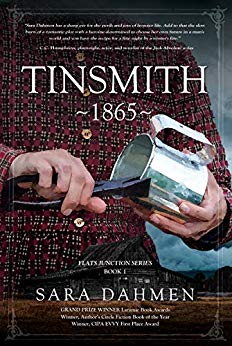 When her tinsmith father and brothers head West, Polish immigrant Marie Kotlarczyk has no choice but to go along. Family, after all, is family. The Dakota Territories are anything but welcoming to the Kotlarczyks, and as the months trip by, Marie must pick up the hammers she’s secretly desired but also feared. When she faces the skeptical people of Flats Town, the demands of the local Army commander, and her public failures, her inner voice grows destructively, forcing Marie to decide exactly who she is and what it means to be a woman smith.

The second book in the series brings back a number of the characters we first met in Tinsmith but focuses on the town doctor’s new housekeeper. This is a wonderful western romance novel that is in no way formulaic. The unexpected twists and turns as well as the rich description of a western frontier town and the people who inhabit it made this a page turner. This author has also taken her research into vintage cooking implements to a new level by starting her own cookware company. 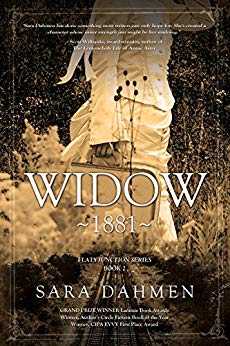 Proper Boston widow Jane Weber moves to the Dakota Territories under layers of lies to save her reputation. Stirring up controversy, Jane rooms with the last Blackfoot Sioux in town while navigating a mercurial friendship with the fiercely independent town grocer. In Flats Junction, though, everyone has an untold story. Battling her shortcomings, falsehoods, and swallowing her inherent curiosity, Jane must choose how she will truly reinvent herself, and where she belongs.

This detective/mystery novel draws you in immediately! It’s easy to empathize with former police officer, John Cabrelli, as he despairs over a mistake made in the line of duty. With that backdrop, we follow him to northern Wisconsin where he learns of an inheritance, but things quickly turn fishy (no pun intended) as he learns there’s more interest in this property than there really ought to be. Nania presents us with well-developed and at times quirky characters, a fast-paced plot line, and some of the best twists in anything I've read this year. The unusual format is equally intriguing with Cabrelli telling his story from his hospital bed as the clock is ticking on his life. 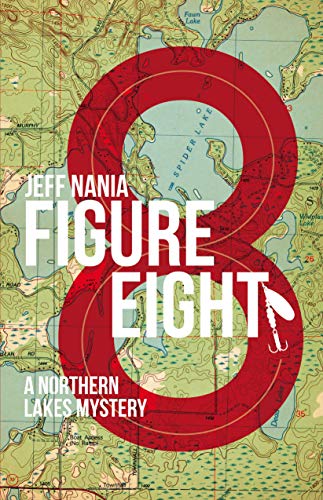 While on routine patrol, John Cabrelli, a decorated law enforcement officer, is dispatched to a disturbance call. The tense situation requires all of his skill and experience get things under control. Then tragedy strikes, an innocent victim dies, and many lives are forever changed. While struggling to pull himself out of the depths of despair, John is notified that he is heir to his aunt and uncle’s cabin on a lake where he spent much of his youth. His return to Wisconsin’s Northwoods brings healing and a sense of peace long forgotten. Little does John know that danger is waiting for him in the north country and he will be forced to hit it head on.

Save the Cat: The Last Book on Screenwriting You’ll Ever Need by Blake Snyder

This book was recommended to me for its stellar advice on creating a tight plot. It didn’t disappoint. I am using these tips to plot out and check the pacing of my current work in progress. I think any fiction writer can use these tools, even though they’re laid out with screenwriting in mind. 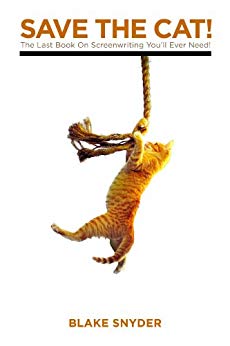 Here’s what started the phenomenon: the best seller, for over 15 years, that’s been used by screenwriters around the world! Blake Snyder tells all in this fast, funny and candid look inside the movie business. “Save the Cat” is just one of many ironclad rules for making your ideas more marketable and your script more satisfying, including: The four elements of every winning logline The seven immutable laws of screenplay physics The 10 genres that every movie ever made can be categorized by ― and why they’re important to your script Why your Hero must serve your Idea Mastering the 15 Beats Creating the “Perfect Beast” by using The Board to map 40 scenes with conflict and emotional change How to get back on track with proven rules for script repair This ultimate insider’s guide reveals the secrets that none dare admit, told by a showbiz veteran who’s proven that you can sell your script if you can save the cat.

Vendetta in Death by J.D. Robb

Eve Dallas is back to solve another set of murders. This long-running series penned by Nora Roberts is one of my favorites, and unlike many series that start to stagnate after a while, the In Death series is going strong in my opinion. Great entertainment. If you’ve never read these books, this is book number 49, so you have a lot of fun reading in front of you. 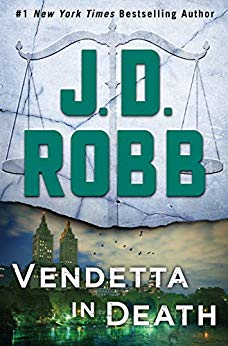 She calls herself Lady Justice. And once she has chosen a man as her target, she turns herself into a tall blonde or a curvaceous redhead, makes herself as alluring and seductive as possible to them. Once they are in her grasp, they are powerless. The first victim is wealthy businessman Nigel McEnroy. His company’s human resources department has already paid out settlements to a couple of his young victims—but they don’t know that his crimes go far beyond workplace harassment. Lady Justice knows. And in one shocking night of brutality, she makes him pay a much steeper price. Now Eve Dallas and her husband, Roarke, are combing through the evidence of McEnroy’s secret life. His compulsive need to record his misdeeds provides them with a wide range of suspects, but the true identity of Lady Justice remains elusive. It’s a challenging case, made even more difficult by McEnroy’s widow, who reacts to the investigation with fury, denial, and threats. Meanwhile, Lady Justice’s criminal crusade is escalating rapidly, and if Eve can’t stop this vigilante, there’s no telling how much blood may be spilled…

Ha! You know I can’t get enough of these disaster, society is crumbling, post-apocalyptic stories. In this three-book series, we find that the EMP (electro-magnetic pulse) that knocked out most of the technology across the nation has been set off by a strange new group with the typical struggle for survival and clashes that ensue in the general population. I found this series even more interesting than usual, given that the disturbing group intent on taking over the nation does even more to add to the chaos than setting off the initial, destructive EMP. 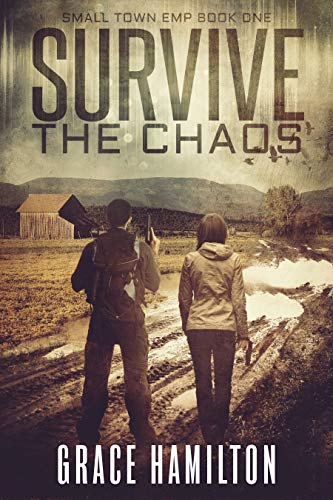 About Survive the Chaos

When the lights go out, anarchy reigns supreme. After Austin Merryman’s wife died, he and his fourteen-year-old daughter left home to travel the country in an old RV. But the comfort and renewal they sought soon descends into chaos—even before the EMP hits.

When a message from an old college buddy leads Austin to a bridge in the middle of nowhere, he finds his friend—now an NSA agent—waiting to give him a USB drive. Before the contents can be explained, machine gun fire strafes the bridge, killing Austin’s friend and forcing Austin into the raging river. Rescued downstream by a beautiful veterinarian, Austin learns that EMP attacks have thrust the world into eternal darkness—and separated him from the only person he has left: his young, but resourceful, daughter. Now, he’ll move heaven and earth to locate her and make it to his brother’s prepper hideaway in Utah.

But the post-apocalyptic world is no longer a friendly place. Resources are growing scarce. Factions break out and walls go up. Everyone is willing to do whatever it takes to survive in an increasingly hostile environment. And Austin’s daughter is caught right in the middle of this splintering society. But an even deadlier foe stalks them as they struggle across the landscape. Someone who hasn’t forgotten about the USB drive Austin possesses. And they’ll do anything to get it back. 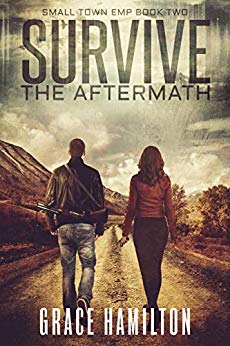 About Survive the Aftermath

The New World Order is at hand. Civilization has crumbled since the EMP thrust humanity back into the Stone Age, and dangerous factions now scavenge for scarce resources in this terrifying new world.

Austin Merryman wonders what the future holds for his teenaged daughter, and if the madness surrounding them is even worth surviving. For now, the group is safe in his brother’s prepper house nestled in the Rockies. But the calm can’t last forever. With sixteen people crammed together in the tiny mountain home, tensions are bound to erupt. It doesn’t help that his brother’s lazy friend gets twisted pleasure from stirring up animosity, pitting brother against brother and daughter against father as battle lines are drawn.

But decisions about who stays and who goes are ripped from their hands as information on the USB drive lays bare pieces of the NWO’s plans. Austin realizes the horrifying truth of why he’s in their sights, as well as the danger he’s brought down on those he loves most. When tragedy again strikes the small group, it will be up to Austin to make the hard choices necessary to ensure their survival. Until a dying man utters the single word that changes everything… 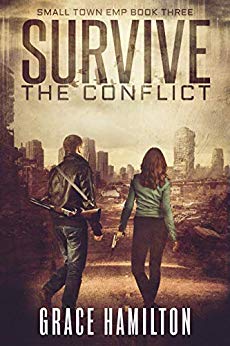 About Survive the Conflict

The world has descended into a nightmarish hell. Death and destruction reign at every turn. Everywhere Austin Merryman has led his tightknit group of survivors has gone from bad to worse as enemies pursue them for the intelligence he possesses. Yet, his group remains steadfastly together even as the infighting continues.

It’s only when the cryptologist traveling with them finally breaks through the last coded barrier, exposing the full extent of the data on the mysterious USB drive, that their luck finally seems to be turning. So many have already given their lives to secure the information, and now they know why. Now, a small window of opportunity remains for stopping the New World Order from succeeding in their plans, but Austin and his cohorts will have to move fast.

Once again, splitting up may be their only option, but at what cost? And can they really launch the countermeasures that could take down the NWO’s plan for domination? But when the enemy closes in and lives of his entire group are threatened, Austin will be forced to choose between his family and the ultimate survival of the entire world…