Two years ago I began this blog in anticipation for my debut book release later in 2014.  I won’t say the usual things. Where has the time gone? How can it be two years already? Because it feels like two years. In fact, sometimes it feels like five years or even a decade!

Most days, I still feel like Tris jumping into the abyss after joining the Dauntless faction. (Don’t you love this video clip?)

I also love the word dauntless. 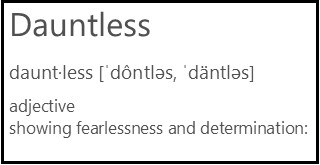 Because that is what writers have to be. And those that independently publish need to tape this word to the edge of their laptop screen. There are many obstacles in our way on a daily basis, but you have to forge ahead, take on those challenges, and not be deterred from your goals. I like to say that I’ve spent each day in these past two years uttering this mantra and abiding by it, but let’s be honest. Of course, I’ve had my “woe-is-me” moments and times of self-doubt. When that happens and I’m feeling like I ought to have accomplished more, I take stock of what I’ve done.

I’ve crammed a lot into 24 months. My blog’s official title is The 3 Rs: Reading, wRiting, and Roaming . . . I sort of compartmentalize my life into those broad categories, so let’s see how I’ve done:

Since March of 2014 I’ve read more than 100 published books and at least ten unpublished manuscripts from my writer friends. I have further read and critiqued hundreds of pages from my critique group partners. I post all of the books I read on Goodreads here if you are interested in seeing my list. I love reading and I hate making the choice between reading and writing time.

Along with some awesome folks who love books (and beer) as much as me, we’ve started a monthly book club in my hometown called Books & Beer. We’re having a ton of fun meeting with Wisconsin authors each month.You can check out our upcoming authors on our Facebook page.

In the past two years, I’ve written three novellas from the Circle of Nine series, a separate middle-grade novel, 50 of my own blog posts, a handful of guest blog posts, countless Facebook posts, and 548 Tweets. The social media posts are mostly done when I’m goofing around on the internet and procrastinating. I’ve also written the first bits of at least a half dozen new stories, which may or may not ever become full blown books. Time will tell. Oh, and just recently, I totally stepped out of my comfort zone by entering a Flash Fiction piece in a contest and have been informed that I am a winner. (I’ll share this piece eventually on my blog.)

The other part of feeling good about my writing has come with being selected as a finalist for both the Kindle Award and the Readers’ Favorite Award. It is wonderful to know that people like what you’ve written. I am forever grateful for those who have taken the time to review my stories. Even the less-than-stellar reviews are important. I know that I won’t please everyone, but those type of reviews make me strive to be a better writer.

In the midst of all that, I have managed to travel to Florida, Honduras three times (to visit our sponsor kids at an orphanage there), Quebec, Las Vegas, London, New York City, and multiple visits to Minnesota, Iowa, and Chicago for family events, college visits and events, and plain old fun. That doesn’t count the book festivals, writing conferences, and speaking engagements that I’ve attended in Wisconsin to promote my novels.

The next twelve months look just as busy—in a good way! In April, my husband and I will be traveling to Ireland and Italy. (I promise to share photos of all the locations I reference in the Circle of Nine series from Co. Donegal, Ireland -- and I can't tell you how excited I am to finally tour Pompeii!) This spring, I’ll also be speaking at the University of Wisconsin Writers’ Institute, the Wisconsin Association of Public Libraries Annual Conference, and the Lakefly Writers’ Conference.

In the fall, I’ll be attending another round of conferences and speaking engagements, as well as celebrating the release of Circle of Nine – Sacred Treasures. That’s what I should be doing now—writing the remainder of the sequel! (I can’t tell you all the fun I’m having with this novel because I don’t want to give anything away.)

So for now, I think I’ll continue to use “dauntless” as my theme. It has most definitely served me well so far!