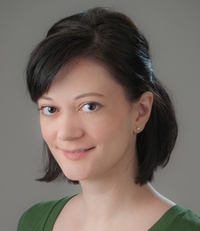 I’m so pleased that middle-grade author K.W. Penndorf has stopped to talk about her writing adventure with us. I've read the first book in her Freya series, Freya and the Dragon Egg and give it an enthusiastic five-star review! This Saturday is the realease date for the second book in the series, Freya and the Battle at the Aal Thing. If you're in the Appleton, Wisconsin area you can take part in the release celebration at 1 pm at the Barnes & Noble at 4705 W. Grande Market Drive, Grand Chute. 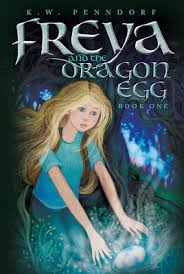 ABOUT BOOK ONE: Freya's family is wonderful. Just not to her. After all, her older sister loves to talk about "pulling a Freya" - a term for any mistake she makes, her younger sister publicly reads from Freya's diary without ever getting reprimanded, and her parents hardly take notice of her. But that is all about to change when her father, Denmark's renowned Viking archaeologist, asks her to hide a precious artifact where no one will find it. Freya jumps at the chance to prove her worth and suddenly discovers herself transported to a magical forest where she comes face to face with not only real Vikings, but a clan of sprites and a Berserk as well. In search of a way home, Freya unearths a realm of adventure and a path to greatness she is sure her family will revere. 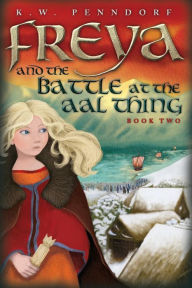 ABOUT BOOK TWO: No Vikings, breathing fire or closing realms. That means this weekend’s birthday party can truly be full of ‘non-adventuresome’ fun and excitement. All Freya has to do is keep her father’s national homecoming celebrations from overshadowing her one little day of the year to shine. Easier said than done when even her class partner for a research paper can’t stop asking about the latest dig and excavation.

But when a field trip to Yggdrasil, the Tree of Life, reveals her focus has been on the wrong thing, she finds herself back in the era she so desperately wants to be keep away from.

With a need to locate Chieftain Harald, Freya discovers a sprite’s secret, putting her on the path to battling Ragnar once again. Yet when that battle includes a round of the game kubb, some meddlesome weather, and her second transformation, will it prove to be too much?

First, can you tell us a little bit about yourself and how you came to publish your first novel?

Sure! I think to sum it up in one word, I would say "persistence."  First, I believed in my story. I think every author does and should.  But it wasn't until agents gave me positive feedback that I told myself others believed in it too. I queried many agents, but it was attending conferences and pitch sessions where I landed my publisher.

I am so excited for the second book in your Viking-themed Freya series. I loved Freya and the Dragon Egg! (And can’t wait to read Freya and the Battle at the Aal Thing.  Where did you get your idea for this series?

Thank you so much! I got the idea 13 years after having visited Denmark for my sister's wedding. While in Europe, I toured Viking museums and a Viking graveyard. Apparently, the graveyard stuck out to me because all those years later, I got a vision of a young girl holding an oval object while at the graveyard. I don't know where that idea came from, but there it was. So, I decided to develop it by figuring out who the girl was, what the object was, why she had it, and so forth on.

Did you have to do a lot of research into Viking lore and Norse mythology or did you already have a lot of these great details tucked away?

I've had to do a TON of research for the series because I never grew up knowing much Norse mythology. The only thing in my series which I had a bit of prior knowledge about were Berserks. In fact, it was that tiny bit of Norse Mythology, that one simple thing, which spurred my path to unearthing other gems about Viking beliefs which I've woven into my series. I love doing research because it's almost as if I'm discovering my own book!

I know that this will be a nine-book series when you are all done. That seems a bit daunting. Can you explain why there’ll be that number of books to tell Freya’s story?

I love reading series. There's something about falling in love with characters and worlds that I don't want to let go of after one book. So, I knew my story just had to be a series. I also knew I wanted something nontraditional like 5 or 6 in the series. But, when in doing research I soon discovered the Vikings believed in 9 mythological realms, I knew immediately my series would need to take me to all 9 of them via a series of 9 books.

I love that there are so many mythology-inspired stories for the middle-grade reader right now. Do you have some favorites in the genre that you also like to read? (Or maybe you have some thoughts about the popularity of mythology in books for this age group.)

I think it's very befitting that middle-grade readers gravitate towards mythological stories or that writers gravitate to setting their mythological series for the middle grade reader because these are the years mythology is introduced to students. I always liked learning about things in school that were tangible in real life, like this example. Kids are able to learn about myths in school then delve deeper into those worlds by heading to bookstores and libraries.

I do feel the need to point out that while your books are written for children, I know adults can enjoy them as well. (I definitely did!) Are you finding that parents are reading these books along with their children? (I think that these books would be a great summer reading adventure for parents and kids together!)

Hahaha, I'm finding that parents, grandparents, aunts, and uncles are reading the book before gifting it to the intended because they couldn't wait for the child to read it first!

Freya is a modern girl thrust into a totally different world (I don’t want to give too much away.) I love how she handles these twists and turns. She seems very real to me and I am rooting for her from the beginning. Do you have a vivid memory of your childhood years that helped you to create such a believable character?

I had a second-grade teacher who during story time would read from her childhood diary and I absolutely loved listening to her stories. It was fascinating, for one, to think my teacher could have ever been a young girl, and two, to hear about her vivid adventures with a cast of family members who all jumped off the pages of her diary reenacting the scenes as if on a movie screen before my eyes. I wanted that sort of vibe for my characters, the sort that makes them come to life.

I have to ask about your delightful chapter art and book covers. Can you tell us a little bit about the artist and how those additions happen? Were you consulted on these artistic decisions or were they a complete surprise?

Oh my goodness, I can't say enough about the artist! Her name is Lisa and she gets my vision perfectly. I'm lucky to be able to give her my ideas, and she somehow works her magic based off of my brief descriptions or a montage of sketches I send her way.

I know you have seven books to go for Freya, but what other projects can you see yourself pursuing in the future?

I have another series I'd like to write, something along the lines of Agatha Christie for kids, and I also have a stand alone for the young adult genre. Sometimes it's hard to decide what to plot next: one of these books, or the continuation of the FREYA series!

Thanks so much for visiting us! It was a pleasure to get to know you better!!

Thank you so much Valerie for inviting me to do your blog! I appreciate you allowing me the opportunity to speak to your followers about Freya!