My BIG Facebook Ad Mistake and the Lesson Learned

I have been having great success with Facebook ads for my clients, but my own book promotion had been taking a bit of backseat, so I jumped on the chance to be part of a group of writers (Blackbird Writers) promoting a special Spring Flash Sale over Mother’s Day weekend.

To layer in extra promotion I boosted one of my posts to a select audience (fans of Diana Gabaldon/Outlander) for $15. That was this post below: 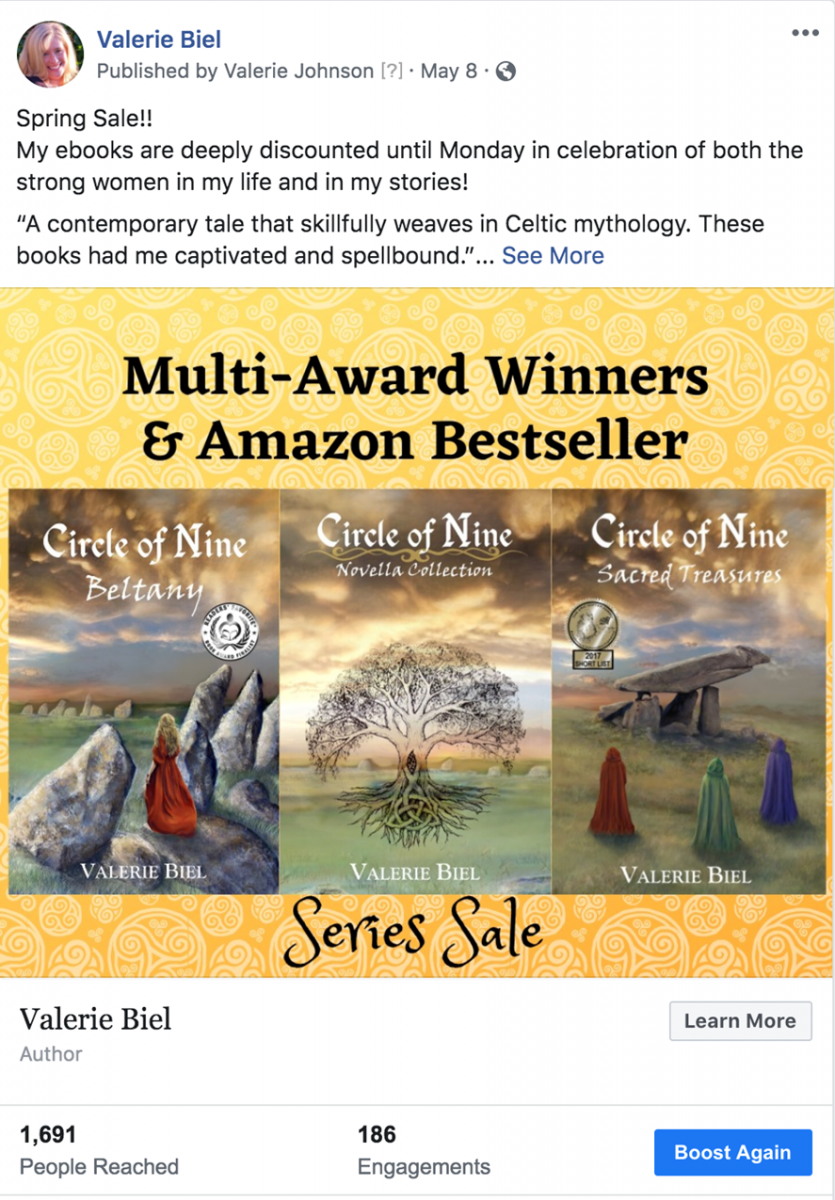 I then decided to advertise to another select audience I had success with in the past (Celtic mythology, Irish lore folks). But when I uploaded the same ad image, I received an error message that there was too much text in my ad. (big sigh) So, I asked for a manual review, which was taking forever. I waited until the next morning (Saturday) and the ad still wasn’t approved. (I mean really -- there's not THAT much text in the image above!)

So I was ticked off, deleted the ad, went back to Canva to reduce the size of the text in the image, and recreated my ad, which was approved. I set my budget to $8/day—because after all it was already Saturday morning and the ad was just for Saturday and Sunday. I would spend about $14. (Here's my revised image below with the words "Series Sale" removed.) 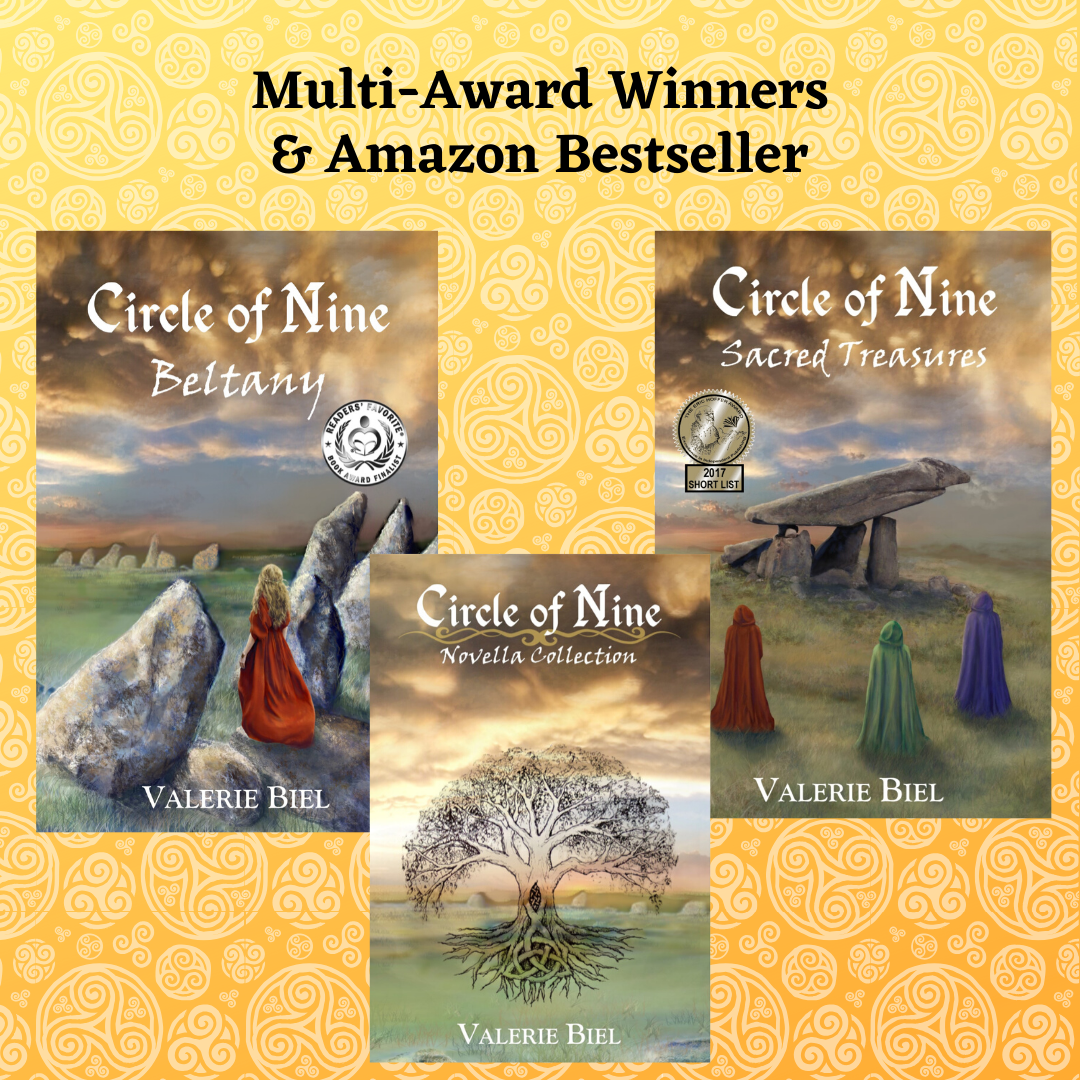 Here’s where my error began: I was in a hurry and I was mad, which caused me to miss a key step that went unnoticed.

The ads hum along all weekend, doing well. I’m seeing an uptick in sales. Yay!

I keep getting a lot of engagement even after the weekend. People are sharing the post with the ad and they’re commenting on it and they’re liking my author page. Yipee!

And it keeps going for days, for weeks, continued engagement!

I’m busy with clients. I’m editing my non-fiction book proposal. I’m binging on Netflix. I’m gardening . . . I am not paying attention to my Facebook ad dashboard.

Then . . . a really nice lady comments on the post that keeps circulating that she’s not seeing the sale prices listed when she goes to buy my books. I write a nice message back, saying that yes, I know, the sale was only for Mothers’ Day Weekend and I’m sorry the post keeps getting shared, but that I hoped she might consider buying the books anyway.

I get into my Facebook ad dashboard as fast as I can and my stomach drops.

I immediately turned the ad off and begin to assess the damage. How much in the hole am I for my dumb, in-a-hurry mistake?

I had quit checking on sales because I thought the ad run was complete . . . so off to my KDP Dashboard I go with my fingers crossed.

WHAT CAN WE LEARN FROM THIS?

1.Obviously, do not be hasty as you load ads into Facebook!

I knew (in theory) that the right combo could produce results like this, but I had never been able to make it work for longer than a week or so with my ads before.

So my dumb mistake, thankfully, turned into a blessing and a great learning experience!

If you want to learn more about running Facebook ads, check out my ad tutorial HERE. Or contact me if you want specific help with promoting your book(s) on Facebook.

Whew is right. Glad it turned out to be a profitable mistake (or is that an oxymoron?)

Hi Chris,
Ha, yes, it is rather an oxymoron, but the description fits. I still can't believe I did that. - Valerie

Glad that you still have a profit. Thank God. Thank you you sharing us with this

Ha- yes! It was definitely a relief! - Valerie

The Second Draft, Revision: The First Page
Wisdom from the Publishing World with Liza Wiemer
BEST BOOKS OF 2021 – PART 2
Writers' Forum - April 2021
The Second Draft Revision: Beyond the Coffee Shop with Tracey Kathryn