If you haven't heard of a thing called book blog tours, let me explain. Basically, I am making viritual stops on 19 different blogs this week where my book is being featured with either a review, guest post (by me), or an interview. A huge thanks to Itching for Books blog tour organizer Shane Morgan. I've had some great stops already this week and am looking forward to a jam packed Thursday and Friday. You can keep up with the individual posts if you follow me on twitter or like my facebook page. Or, you can find the entire list of stops here. And, don't forget to enter the contest where one lucky winner will get a $20 Amazon gift card and two runners up with win a kindle copy of my book. Click on the Rafflecopter giveaway below to enter.

I was asked a great guest question by the "Authors You Want To Read" blog, which featured my answer yesterday.

What are your writing quirks?

At first I thought, Who? Me? I don't have ANY! Um, yeah--and then I decided to be honest. Here's what I wrote:

Up until a month ago, I probably would have denied having any writing quirks, but then the great bathroom remodeling of 2014 began. I live in a rural area and I work from home, so I tend to write in a very solitary fashion with my husband who occasionally works from home as the only witness to my writing habits. And in a smart self-preservation move, he does not point out anything that might seem strange.

We’d been planning this bathroom remodeling for many months. We signed a contract in March and were told it would be July, then August, okay September before the contractors would get to us. September came and went and no contractors arrived. Finally in October, we were given an official start date of November 17.

Plumbers, electricians, carpenters, and tile installers descended on our home. And suddenly I had witnesses to my weird writing habits.
I couldn’t hide away. I’d been displaced from my normal writing lair in the corner of the master bedroom by all the activity and the oldies station the contactors seemed to prefer. I took up residence alternately at the breakfast bar and the dining room table, but neither were my beloved pod.

Writing quirk number one surfaced very quickly. I really, really like to have all my stuff around me when I write. I have fun chachkies on my desk that I pick up and play with from time to time. The Swedish bird figurine my brother brought back from his first overseas tour of duty in the Air Force, the decorative box that holds the paper cranes my daughter made for me, the Honduran pine needle woven basket holding the pebbles and shells from my travels, plus all my reference books that live in the armoire next to my desk. Never mind that if I walked 20 steps I could get to all of these things.  I needed my stuff. I hated not sitting at my desk to write. Absolutely hated it. I did manage to get some writing done but it was a great effort to acclimate to my new space.

Here's a photo of the stuff on my desk that makes me happy! (Oh, and I think that first photo made my desk look too clean--so here's a second, wider shot, showing the reality of it all.) 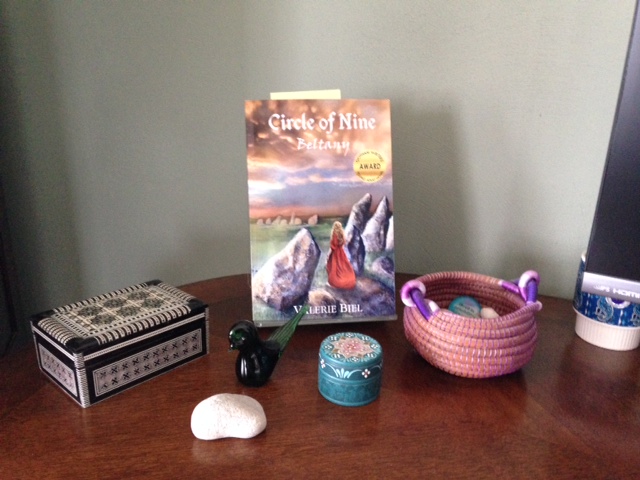 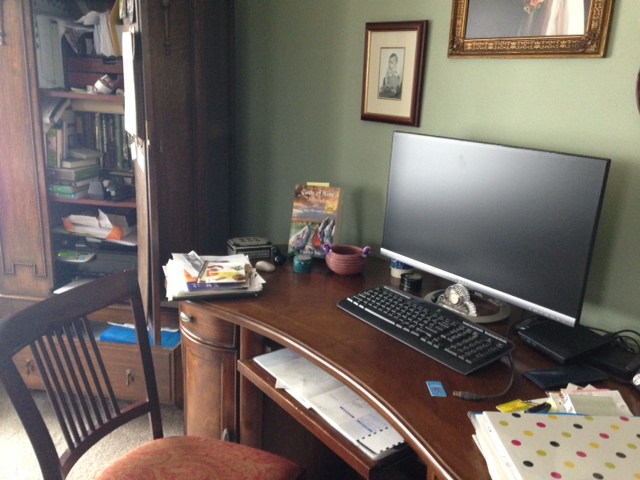 Writing quirk number two: I write in my pajamas most days. After three days getting dressed so that the construction guys wouldn’t see me in my pj’s, I gave up. My pajamas aren’t anything special and actually, they look pretty much like yoga clothes. So, I reasoned it was fine to go back to my old habit. After all, I was already stressed out about being displaced from my desk, we didn’t need to add clothing stress to the mix. (There will be no pictues of my pjs.)

Writing quirk number three: I talk to my characters and test out bits of dialog as I write. I wasn’t even aware I was doing this in front of anyone, until—much to my surprise—the tile guy thought I was talking to him has he walked past and answered me. Cue the creepy music, watch out for the strange woman in the pj’s talking to herself in the dining room.

Writing quirk number four: MY coffee cup. Not YOUR coffee cup – mine, mine, mine! I’m a little possessive over my cup. It’s a super awesome, hand-painted, folk art patterned mug. It’s not from any place special—I probably got it at Pier One, but I love it and it’s mine. I’m convinced that I write better with this mug by my side.  Don’t use my mug! When one of the contractors took me up on my coffee hospitality and was reaching for a mug, I had a 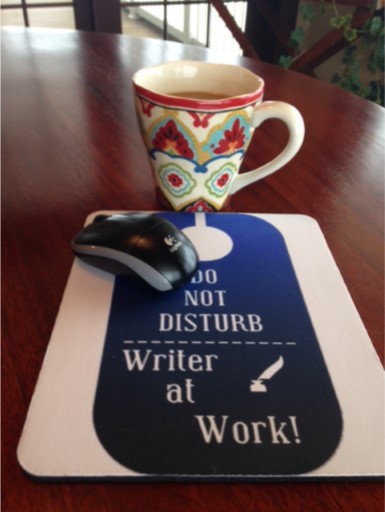 mini-panic attack and sent out waves of thought control –not that one, not that one, not that one. He picked a plain white mug, and I breathed a sigh of relief. (I mean really—how was I going to wrench my mug from his hands without seeming like a complete weirdo?? This was the same guy who previously heard me talking to myself.)

Finally writing quirk number five (which has nothing to do with the contractors): I have a special editing pen. I do a lot of editing right on the computer screen, but I do my best editing on paper. When it’s time for this step, I grab my trusty pen. A lot of people edit in red. I DO NOT—red feels mean, red feels aggressive, red feels wrong! My special editing pen is fuchsia or maybe it’s magenta—but it is definitely not red!

I’m guessing a lot of writers have quirks like this. I was certain I had none, but really I am not ashamed of any of them. If these innocuous little habits keep me happy and keep me writing—no harm done, right? (Just DON’T touch my mug!)