November is cozy with its cool air, pumpkins, and turkey, but it’s also thrilling. For writers, that is. National Novel Writing Month is thirty days of writing, with the goal to produce fifty-thousand words for a novel. It’s a daunting challenge, but it’s also a self-directed class in writing-skills improvement. Plus, there are prizes at the end, and the NaNoWriMo site offers deals on products. (BTW, I write using Scrivener, which I recommend. Participants get a great discount.) In honor of the month, I’m offering tips about prepping and writing for both of my September and October blog posts. 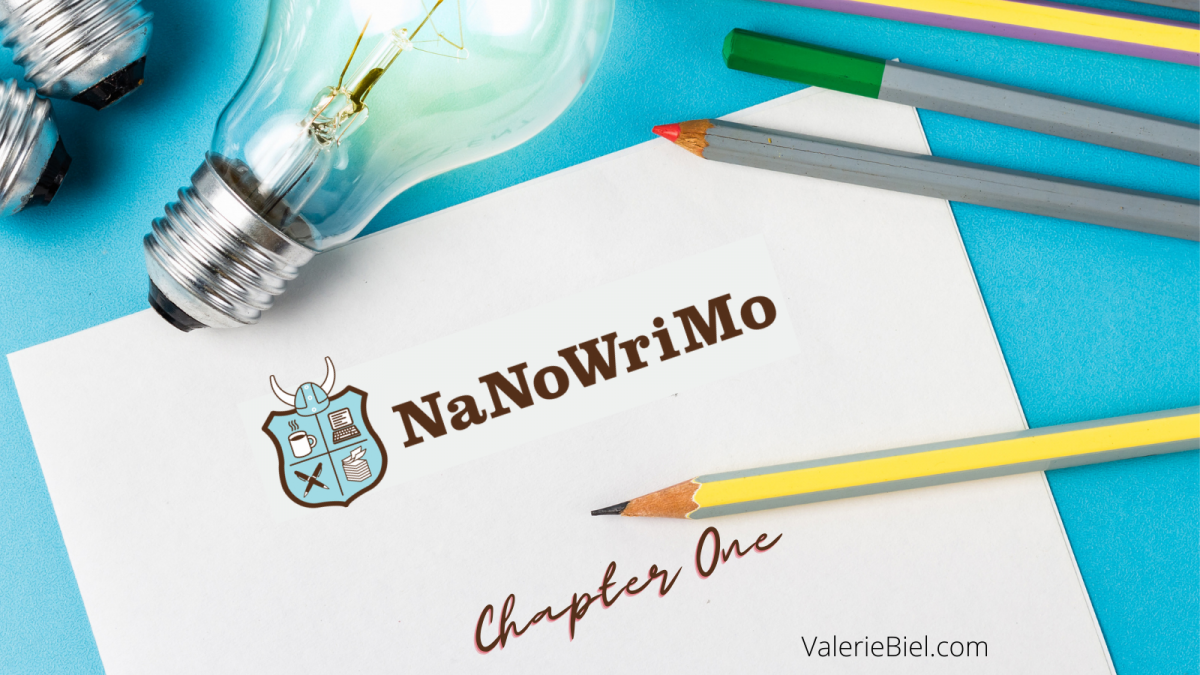 In September, I discussed writing the center of a novel, the response and attack as described by Larry Brooks. After you’ve selected a genre, a protagonist, and basic plot action, for NaNoWriMo, consider a few tips such as seeing scenes (chapters, essentially) as a series of lights on a string. Write to the conflict of each scene and be flexible with its ending. To maintain speed, just drop the ending if you get stuck. Move to the next scene. Write the ending of the scene later. Also be open to rearranging scenes after most of the middle has been written.

This month, I’ll discuss time management and starting scenes. Time management is key because without it, the work can’t be accomplished. And understanding how to begin scenes is important because it helps overcome writer’s block.

I tell my writing students that half the job of completing schoolwork is time management. It’s one thing to learn new material, it’s another to meet deadlines. The same is true for novel planning. While it’s important to be creative and pen new material, it’s another to commit to writing every day to a pre-determined word count. For the month of November, I’ve marked out “Writing O’Clock” on my calendar. I’ve also reviewed the month for events such as Thanksgiving, plus two potential travel days. In fact, the entire week of Thanksgiving can be hectic with cooking, shopping, and holiday fun. If my plan is to write fifty-thousand words, at minimum sixteen-hundred per day, I need to plan for one week where writing time is squeezed and my concentration is lower.

I get up early to write. It’s not uncommon for me to rise at four o’clock and be at my computer with a cup of coffee shortly after. I write until about nine or ten, take a break, and then start my teaching day. (I’ve worked from home for several years.) If I have the energy, I’ll return to my novel later in the evening. But that’s usually just to sketch out the next morning’s chapter. I like to sleep on ideas and then put them to paper in the early morning when my mind is fresh.

I know other writers are the opposite and write in the evening—or even the middle of the night. More power to you, if that’s the case. Just plan for it during the month of November. The NaNoWriMo site has its own official calendar, too, where you can copy its prompts and tips to your own. The payoffs are many. Not only will the word count add up, so will the skill level. I’ve found that the more disciplined I am about writing, the better my technique gets. I make fewer errors in dialogue and scene flow is improved. 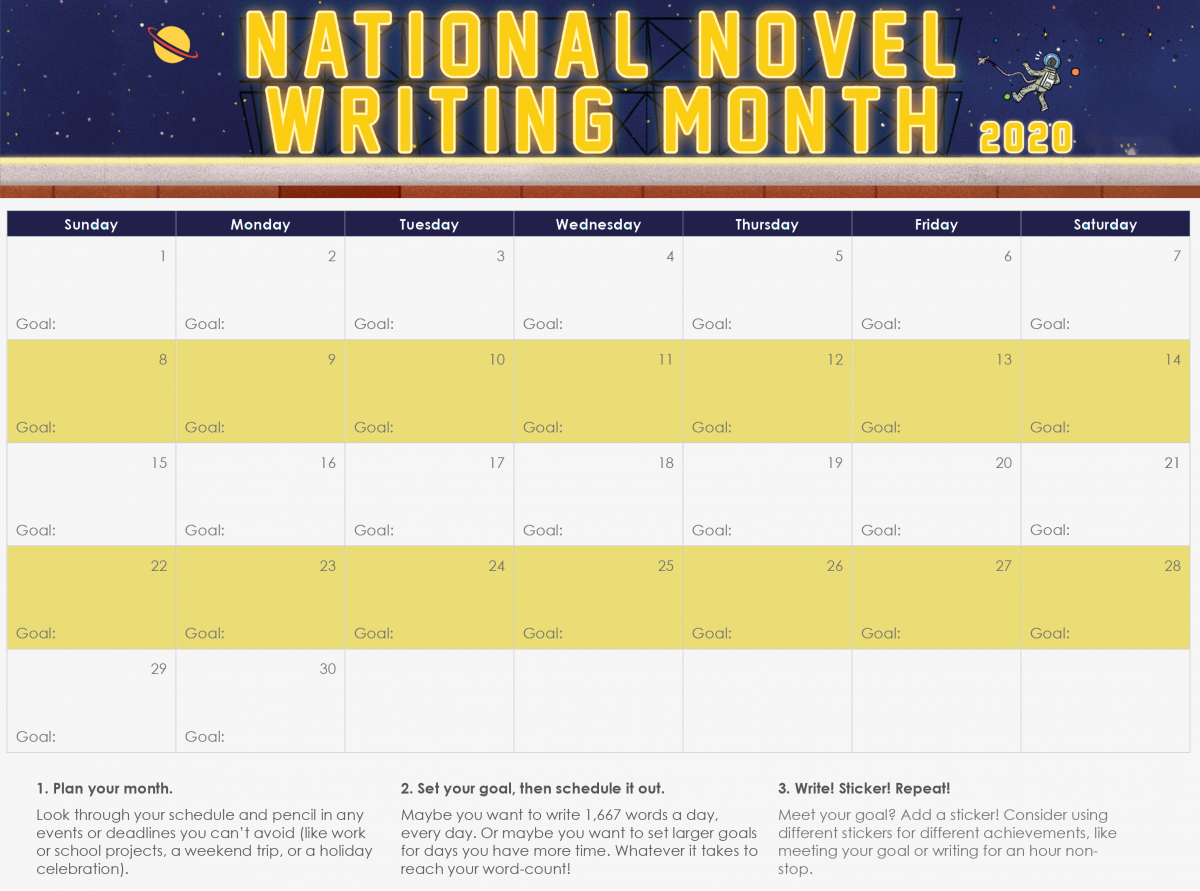 The good news for my writing plan is that some of it is revision. I have a great deal of the work either completed or outlined with revisions, so I’m feeling confident approaching the month. Also, I have an agent conference scheduled in the middle of it, which will keep me motivated to push through for the entire month.

NaNoWriMo has write-ins planned, so add those to your calendar. Do it now. Have the month planned before it begins. That way, you’ll feel in control of your schedule rather than it controlling you.

Think about how you will begin each scene

Like introductions to essays, the first paragraph of a scene (or chapter) often is hardest to write. A scene’s beginning is either description or dialogue, right? Larry Brooks describes it as a cut-in to the story. I remember being told to start in the middle. If you’re someone who offers paragraphs of description or backstory, this message is for you: Cut it out. Write it elsewhere if you need to, but for your novel, cut it out. Start where the action is. It could be a character revealing new information, having a meltdown, or moving to a different location. Ask yourself what would interest to the reader. Not what would inform the reader. What would 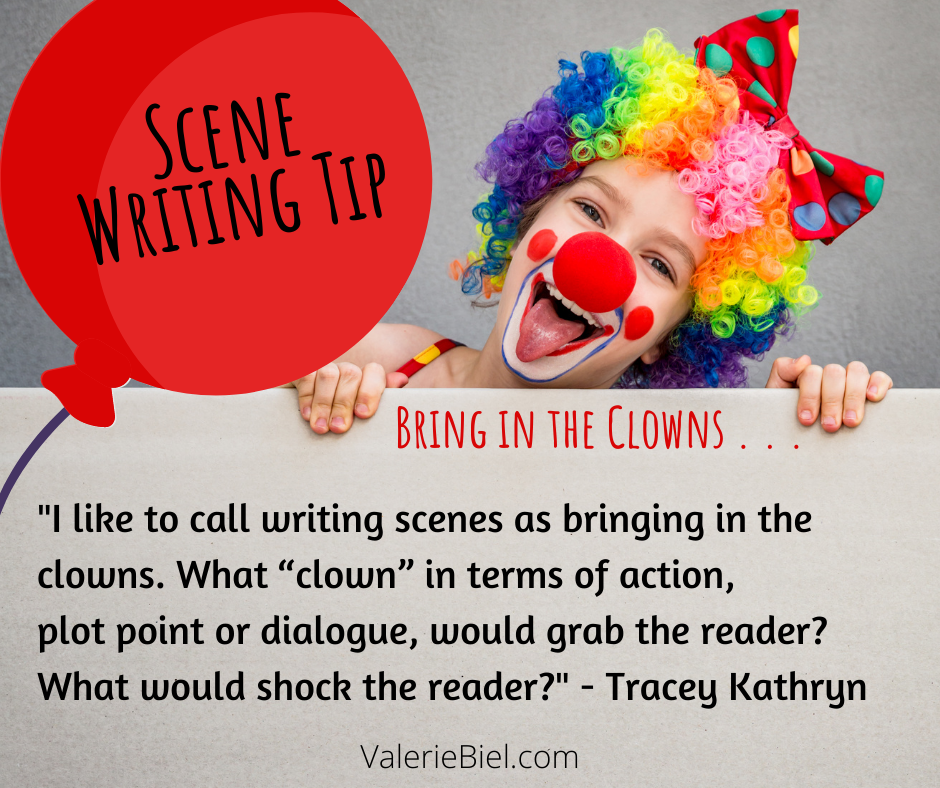 interest the reader. What can you offer to him or her that would be new? Think about what the reader would want to know; what would be the most entertaining aspect of the scene. Write that. If you have to add backstory for clarity, add it later. After the action has been written.

I like to call writing scenes as bringing in the clowns. What “clown” in terms of action, plot point or dialogue, would grab the reader? What would shock the reader? Envision that shock or new information as a lightbulb. Write to the light, then move on. If the ending to the scene doesn’t come right away, move to the next scene. Jot ideas as they come. Let your subconscious end previous scenes as you write new ones.

The goal: Word count, skill-building, and a sense of accomplishment

The goal of NaNoWriMo is to write to fifty-thousand words in thirty days. To prep for this, I suggest to establishing a calendar, and developing scene prep skills to overcome writer’s block. Last month, I highlighted strategies to compose the middle of a novel, the response and attack. I suggest seeing the scenes, or chapters, as lights on a string. Writing to the light. Leave scenes behind if the ending isn’t apparent. Go back later. As you become more familiar with your characters, abandoned scene endings will become easier to write. Finally, be willing to rearrange scenes after the middle has been written.

As I approach the start of November, I feel prepared. I’m motivated to write every day. Even if I don’t win a prize, I’ll feel accomplished knowing that I stuck to my goals.

Read more about tackling the middle of a novel from The Writer’s Digest here. Also, it’s a good idea to brush up on what every novel needs from Larry Brooks. He offers fantastic advice that every writer should be aware of before attempting NaNoWriMo.

Next month, I’ll offer follow up about my experience with NaNoWriMo. (If you missed part one of this series, read it HERE.)