Novellas to Accompany "Circle of Nine"

Yes, it is the end of the month. Crazy that June is gone already. As promised, I am announcing future publication dates today! In addition to the wonderful requests for the sequel to Circle of Nine, many of you have asked for longer stories about some of the historical characters you met in Circle of Nine – Beltany.  I am happy to oblige. I am nearly finished with the first of four novellas following these historical characters. 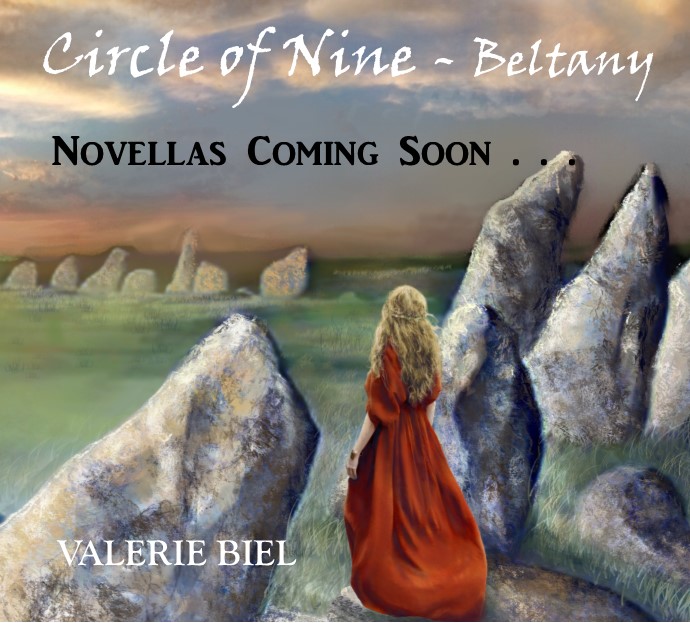 Fans of Dervla Quinn will be happy to know that in this first novella we will find out what happens after she and Liam travel north to meet his family. I adore this character and was so happy to revisit her world!

The other three novellas are:

Bressa’s Banishment – where we learn of the events that led to her living on the remote island where we meet her in Circle of Nine. (If you need a reminder, Bressa is the older woman who provides guidance to Onora and Ian when they flee from Father Bannan and his supporters after the Beltane Eve bonfire.)

Phoebe’s Mission – follows the path of Brigit’s grandmother. Did you wonder why she ended up living in the United States? I promise to satisfy your curiosity!

Finally, Adele’s Agreement will give us some insight into promises made and possibly not kept between Adele and her estranged husband regarding the role of magic in the life of their son.

Writing a novella is new for me. The typical novella is approximately 20-25,000 words, so each of these four stories will be approximately one-quarter the size of the average novel. Each story will be initially released as a $.99 e-book exclusively on kindle as I complete them. When all four are complete, they will be bundled into a traditional paperback. Release date goals are one per month for September, October, November, and December—with the paperback being released in time for Christmas—or should I say Yule??

Additionally, I am humbled by the many requests for the sequel to Circle of Nine - Beltany.  Please be assured that I am hard at work on it. Circle of Nine – Sacred Treasures is currently scheduled for an early spring 2016 release date.

Thank you so much for being patient with me. Since writing Circle of Nine – Beltany I took a detour to write two middle-grade novels. One is an ecological adventure set in the Amazon. (You can read more about it on my website.) The other allows us to see the world of domestic abuse through the eyes of an 11-year-old girl. I plan on traditionally publishing these stories. The manuscripts now sit in the hands of a number of agents who may or may not offer representation. I hope that I am able to announce progress on that front soon!

Now, back to writing. I have a schedule to keep!