Review of "The Assignment" and Interview with Author Liza Wiemer

I had been looking forward to reading Liza Wiemer’s The Assignment as soon as I heard a description. Based on a true story, Wiemer’s novel follows two teens who refuse to do an antisemitic assignment given in history class—one in which they’re expected to argue FOR the Nazi Final Solution and the murder of millions of Jewish people. Wiemer deftly handles this tough topic, creating two main characters, Cade and Logan, who are both fun and funny, witty and endearing, and just regular teens with regular teen problems on top of the huge challenge at the center of the novel. You’ll sink into the story as if you’re eavesdropping on their conversations. Wiemer’s dialogue writing is just that good! Standing up for the right thing should be easy, but somehow it never is—and the finely crafted plot brings us unexpected challenges and a surprising, poignant twist. This is an important modern-day story about intolerance and racism that every teen and adult should read and DISCUSS. I am going to be thinking about this book for a long time and take the liberty to quote the question on the cover. “Would YOU speak up for what is right?” 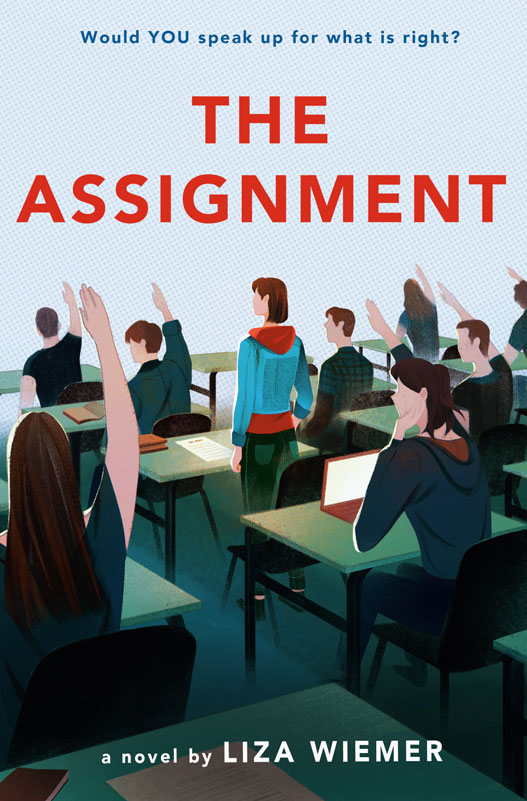 SENIOR YEAR. When an assignment given by a favorite teacher instructs a group of students to argue for the Final Solution, a euphemism used to describe the Nazi plan for the genocide of the Jewish people, Logan March and Cade Crawford are horrified. Their teacher cannot seriously expect anyone to complete an assignment that fuels intolerance and discrimination. Logan and Cade decide they must take a stand.

As the school administration addressed the teens' refusal to participate in the appalling debate, the student body, their parents, and the larger community are forced to face the issue as well. The situation explodes, and acrimony and anger result. What does it take for tolerance, justice, and love to prevail?

I’m so pleased Liza Wiemer has taken time out of her busy schedule to talk with us today. (Liza previously hung out with us when I reviewed her debut YA novel Hello?--read that post here.)

The Assignment is set to release on Monday, August 25. You’ve gotten some excellent reviews in the publishing world. School Library Journal’s review calls The Assignment “An important look at a critical moment in history through a modern lens showcasing the power of student activism.” And Kirkus says it’s “an important plot-driven story about two teens who stand up for what’s right in the face of adversity.” Wow. You have to be so excited!

Q. Tell us about your launch plans and how people can take part. 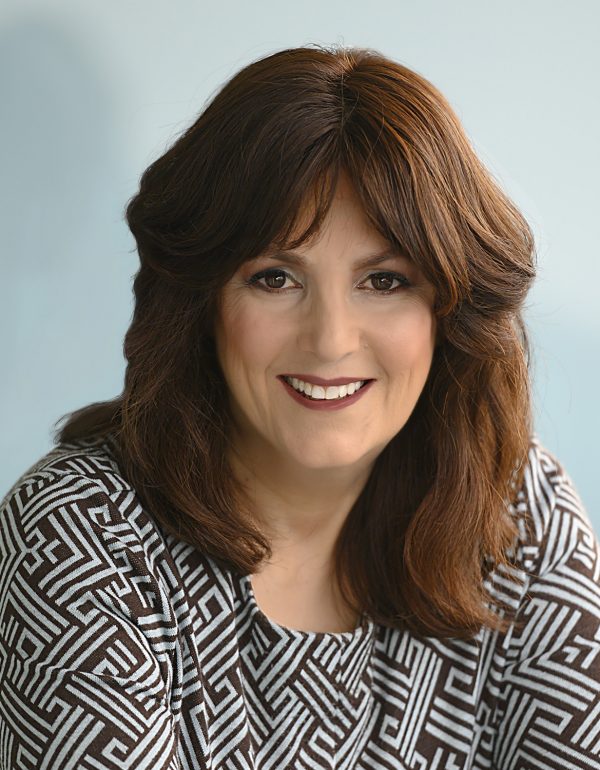 These online events are open to anyone who registers to attend.

Monday, August 24, 6 pm CDT - Teens Speak Up Against Injustice: The Story Behind “The Assignment”

Online and in school, our students are inundated with situations that force them to make hard decisions and to confront situations that might alienate them from their peers. Join this conversation about real-life events, difficult choices and how ordinary teens can have the power to amaze and inspire us.

Liza Wiemer, author of THE ASSIGNMENT discusses her latest novel, inspired by a real-life incident, which explores the dangerous impact of discrimination and antisemitism. Kirkus Reviews call The Assignment "an important plot-driven story about two teens who stand up for what's right in the face of adversity." This launch event will feature Wiemer in conversation with Boswell Book Company's Jenny Chou. Cosponsored by the Harry and Rose Samson Family Jewish Community Center.

Q. I know your novel was inspired by a true story. Can you tell us a little bit about Archer and Jordan and their story?

A. Archer Shurtliff and Jordan April, both 17 at the time they received the assignment that helped to inspire this novel, attended separate upstate New York high schools and met at an education program titled, “Principles of Literary Representation.” They received an assignment that inspired the one I created for my novel. To learn more about the one the received, read this article: “CNY students upset after being asked to defend Nazis, Holocaust for homework.” Both students felt that the assignment was reprehensible and promoted hate. When they spoke up against it, they were able to choose an alternative assignment. Afterward, they continued the fight against the assignment. They contacted a reporter and also the Anti-Defamation League—an organization with a mission “to stop the defamation of the Jewish people, and to secure justice and fair treatment of all.” The teens extra actions and their deep commitment led to the promise that the assignment would never be given again. Over seventy students received the assignment, but only Jordan and Archer had the courage to speak out against it. One other student refused to do the assignment, choosing the alternative. Without a doubt, Archer and Jordon exemplify what it means to be upstanders instead of bystanders.

Q. Would you let us in on your novel’s journey? How long did it take to write? Did you have any setbacks with the progress? How did it find a home with Delacorte Press? (Phew – that’s a lot of questions!)

A. The journey to write this novel has what I would call a miraculous set of circumstances. More details can be found on my website: The Story Behind THE ASSIGNMENT. After I met Jordan in person at River’s End Bookstore in Oswego, NY, and talking with Archer on April 4, 2017, I ended up writing an article about the assignment and the experience. When I returned home, an author friend, Clara Kensie, declared that I had to write a novel about this, stating, “You were born to do this.”

I began doing extensive research in May 2017, returned to Oswego in July. Originally, I had written this book in third person omniscient so that I could highlight many different perspectives and show many different angles. When three agents told me that I had to write this in first person, I paid attention and started over. In September 2018, I was offered representation from Steven Chudney. After some revisions, he put it out on submission and within a few weeks we had an offer from Beverly Horowitz, Publisher and Senior Vice President of Delacorte Press.

Q. You’ve described being the target of antisemitism throughout your life. How did you feel taking on this tough topic when it is, in part, personal to you? I imagine that some scenes were very difficult to write.

A. Without a doubt, those experiences left a mark and I knew that I would often hide my Jewish identity from the outside world because I was afraid to become a target of hate. Writing this book brought them all to the surface and I had to confront the impact. Fear is powerful and can lead you to silence. But there were also many times where I would speak up. That was never easy, and those moments also left a mark. I drew upon all of those experiences to write this novel.

Q. Now, I’m going to be very careful here to not give anything away because I hate it when there are spoilers, but I’m dying to know if the big twist in the story was something you had in mind all along or if it came to you as you were writing?

A. Great question. It was actually something I had wanted to write about for many years and had considered including in my first young adult novel, Hello?. Actually, it was a part of an early draft. I had to cut it. Still, that storyline was important to me and it was perfect for The Assignment.

Q. You know how much I loved Hello? and now I’m a huge fan of The Assignment, too! Clearly, the world needs more of your writing. Are your next projects likely to be young adult novels or do you think you might ever switch genres. (And if you don’t think it is too impertinent during your launch week to ask . . . are you working on anything new right now?)

A. I actually revised a picture book that I had completed over twenty years ago. It needed updating. I also had to learn more about writing picture books. Revising it was a fun process and I’m really glad I pursed that. I have one idea for a young adult novel that my agent and editor like, but I’ve been struggling with it. Part of the reason is that we live in a different world now. Covid has changed everything and the place I had envisioned was based on a pre-Covid world. I’ll have to see what happens and whether or not I’ll find the inspiration to delve into it.

Q. Is there anything else you’d like to add?

A. Thank you so much for having me on your blog and I’m so grateful that SCBWI-Wisconsin has brought us together!

I am so grateful SCBWI-Wisconsin brought us together, too!

Here’s where you can find Liza online:

Thanks so much, Liza! I know this week is crazy busy for you. Good luck with your launch!

And, to everyone reading this interview, you need to buy Liza’s book today—right now! Everyone needs to read this book!

To learn more about Liza's first book Hello?, click on the book cover below. 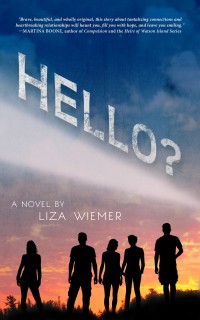 I've read this book, and love it.
The interview with Liza makes me even more eager to Attend her virtual launch party next week, hosted by Boswell Books.
Thanks for this excellent spotlight on a book that is bound to become a longtime classic.

Thanks, Sandy!! I agree that it will become classic! -- Val

The Second Draft, Revision: What Does the Reader Want? with Tracey Kathryn
Speaking Engagements for Authors: Why, Where, and How
Advertising Your Books Part Three: Amazon Ads
Wisdom from the Publishing World with Greg Renz
Writers' Forum - May 2021