Tips to Manage Your Inner Writing Critic with Tracey Kathryn

Welcome to May, writers. In Wisconsin, it’s a month of flowers, sunshine, end-of-school events, Mother’s Day, and Memorial Day. May is a wonderful kick-off month to summer.

Not quite this year, however. If the month of May were writing a story about itself, its inner critic would be going wild. I envision May’s self-editor saying something like this:

I’ll begin by getting folks excited for the start of the warm season. I’m the intro to summer, after all. But wait, there have been frost warnings—and then there’s the pandemic. Scrap everything I was going to write about. The forecast calls for overcast skies and temps well below average for another few days. I’ve got it: I’ll email February and ask him how he gets people encouraged. I’ll get his answer, but that means I have to start over. Delete, delete, delete. I’ll begin my story with gray skies and a terrible health situation, but then I’ll add good news about Mother’s Day. Huh? Snow in the forecast? Scratch that!

Battling inner dialogue while composing any kind of original work is daunting. How do writers keep the inner editor under control while working on a new story? This month, I’ll offer tips to reduce self-editing while writing. The first tip is to understand your novel’s story question. Having a one-sentence description of the story is a hedge against writing off into the weeds, then criticizing your progress. Second, create an outline as a guide to again, stop from writing off-plot tangents. Take the time to structure your novel before committing to writing scenes. Also, be flexible. It’s okay to leave a chapter and come back to it rather than dwell on it or dump it. Finally, be concise. Avoid filler words. Write the plot, then add the story. 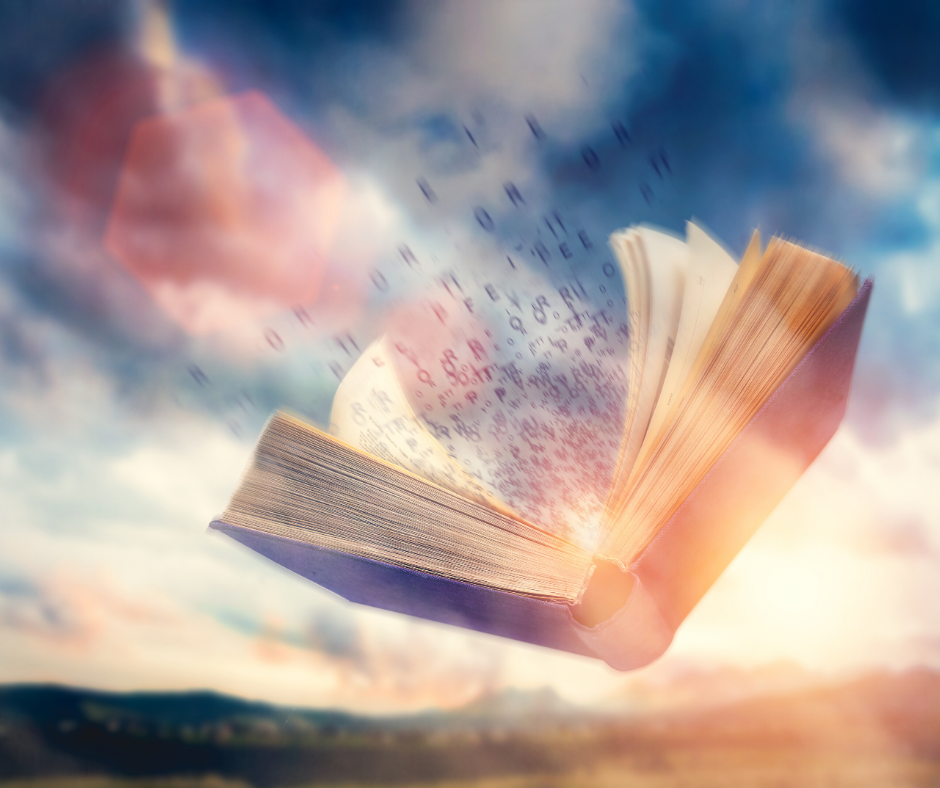 Before starting, answer the story question: What is the central conflict affecting your protagonist? In one sentence, recite what the story is about. It may change, but you should have an understanding of it before starting to write. In the show A Charlie Brown Christmas, the story question is will Charlie Brown overcome his depression to discover the true meaning of Christmas? In the play Hamlet, will the prince overcome paralyzing thoughts to avenge his father’s murder? In the movie Top Gun, will Maverick overcome his self-doubts stemming from his father’s tragic legacy to become a trustworthy fighter pilot?

As you can see, the concept of overcoming something is prevalent in story questions. When in doubt, ask yourself who is overcoming what in the story you’re writing. Know the central idea of your work. It helps keep you on track, which in turn silences the inner critic who wants to question your ideas and lead you on a keyboard goose chase to frustration and futility.

Larry Brooks says to understand the goal the hero is pursuing. So, to reduce the inner critic who will distract you from the finish line, keep the story question at the forefront of your mind. Write it down. Post it on your calendar. Keep it handy so you don’t get distracted or defeated by self-editing on the way to a finished first draft.

I am a reformed pantser. I used to start writing by tapping the keyboard. Now, after a master’s degree and years of teaching, I use a novel outline template and insert plot points into each element before working on something new. If you’re writing commercial fiction, the elements of plot are universal. The structure of the plot, which is the series of problems the hero overcomes, supports the story question. Therefore, having an outline of major events in the story is vital. Sure, those events may change. Your story may undergo major revision, but knowing key plot points before undertaking the writing process will soothe your inner writing devil. You should at least be aware of major points including the inciting incident; point-of-no-return number one; point-of-no-return number two; the climax; and the 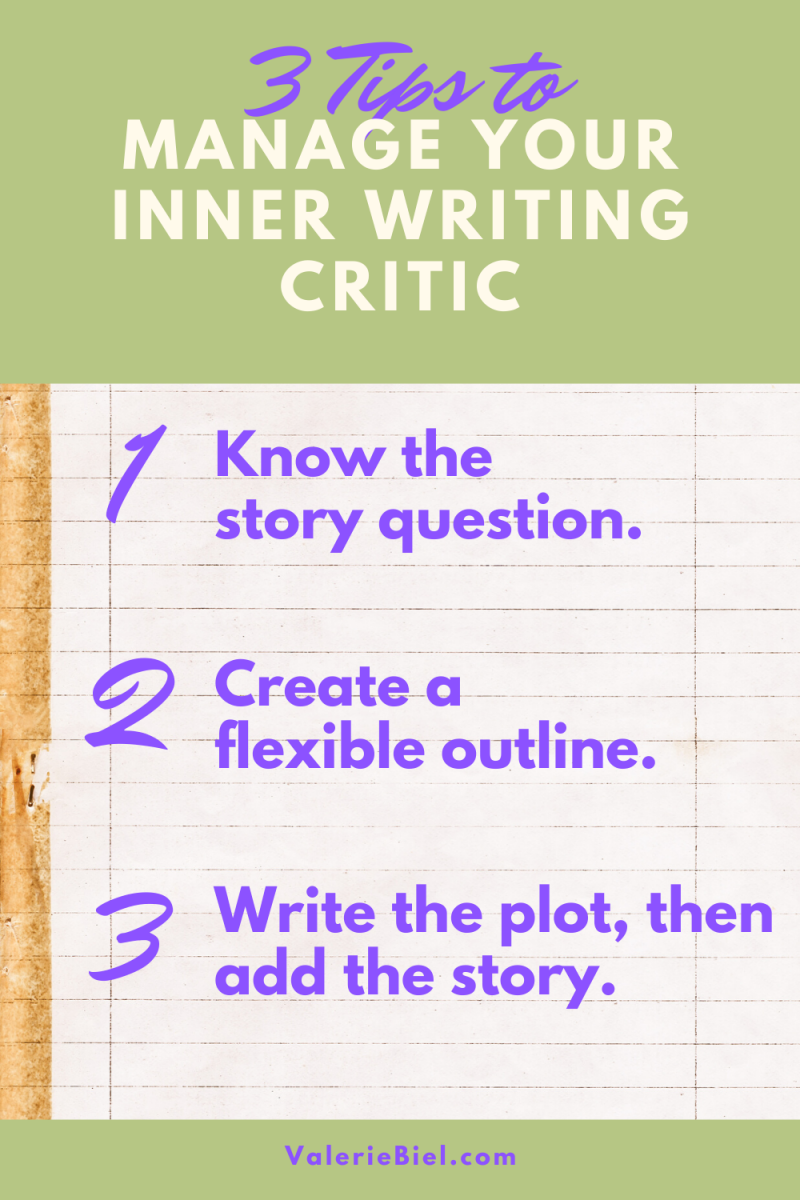 Resistant to writing outlines? Tell yourself that outlines are flexible. It’s okay to leave a scene unfinished before moving to the next one. I’ve discovered that it’s more productive to move to the next scene rather than dwell on a previous one. I save time and silence the inner editor who starts to critique what I’ve written. I go back and finish the scene when I have better energy and a clearer mind.

Write the plot, then add the story

Plot is action. Story is emotion. When working on a first draft, get the plot down first. Be succinct. It may appear to be a fleshed out outline. That’s okay. From it, you can create a story map. Remember, the goal is to keep moving forward without over-editing or falling victim to frustration or intimidation. In fact, at the early stage, it’s better to starve the inner critic than to feed him. Writing is a tough thing to do. Increasingly, it seems that fewer people are doing it. Writing an eighty-thousand word novel is a difficult task. Give yourself methods to get to the finish line.

For me, writing the plot is exciting. I’m focusing on major events in the story; it keeps me interested. If I allow my inner editor to dwell on minutia at this stage, I won’t have the energy to write to the end. Focusing concisely on the inciting incident, the plot twists, and the climax gives me satisfaction and a sense that I’m in control rather than the words controlling me. While I enjoy developing characters, at first I have to focus on major plot points. That way, my inner editor is less intrusive and distracting. After the major plot points have been established, I can flesh out characters and add subplots.

One of my favorite quotes about writing (and perhaps one of its funniest) is attributed to the great Red Smith. When he was asked if writing was difficult, the great sportswriter said, “Why no, you simply sit down at the typewriter, open a vein, and bleed.”

Truth. But by silencing my inner critic while I’m developing a novel, the bleeding is less, at least. To silence your noisy self-editor who could sabotage your writing, know the story question; spend time creating a flexible outline; and be concise by writing the major plot points, and then going back to develop characters, add emotion, and flesh out minor events.