Attempting to gain new readers through the Wattpad platform was a failure for me. I’m happy to share my experience to assist other authors in what to do and what NOT to do. To start, I should explain that I didn’t lose anything financially because it is a free platform, and I admit there certainly were things I could have done better to gain audience attention.

Wattpad is a free reader platform where published and unpublished authors write stories and post segments/chapters on a regular basis for feedback and ratings from readers.

Officially Wattpad describes themselves as such: “Wattpad takes everything you love about storytelling, and turns it into a social, on-the-go experience. The result is a one-of-a-kind adventure in creation and discovery. To date, more than 45 million people around the world have joined Wattpad. We’re proudly based in Toronto, Canada, but Wattpad stories transcend borders, interests, and language.”

Sounds pretty good, right? I thought so, too. (This is where I would cue the laugh track if my website had audio.)

There are plenty of websites and tutorials that explain how to set up your author profile and story description on Wattpad. Here’s one that has a good checklist.

I followed these instructions carefully and created a profile page with a nice header and story page, including all the write tags (key words). You can see all of this on my profile page and on my story page. You will also see that I have a grand total of four followers. (Quit your laughing!) At the moment, my full book (Circle of Nine: Beltany) is available to read for free on Wattpad, but I will in the future amend this and leave just a sample available. I was upfront about my plans, listing August 1 as the date I’d do this to give my handful of readers time to finish the story. Now that I'm at this point, I feel like my experiment has come (almost) full circle and it was time to assess how well this went--obviously not very well.

I hoped I’d be one of the Wattpad successes, gaining access to a new audience for my story, just like author Linda Poitevin. You can read about her Wattpad success here.

1.      “Remember Wattpad is primarily a social platform. Respond to reader comments, thank you readers you follow you, and so on.” CHECK.

“Follow others on Wattpad, give them feedback on their stories, and post in the community forums.” PARTIAL CHECK

Honestly, I didn’t have the time to add one more social media platform to my interaction list. However, I did post in the Community Forums about being new to Wattpad and encouraged others to check out my story. I followed a few paranormal/magic writers, but I didn’t actively engage with them. I admit this may be part of my failure.

2.      “Release your book as a serial (a chapter or two a week) to build reader interest, engagement, and anticipation — which is more likely to lead to purchases.” CHECK

I religiously posted a new chapter every Friday for 30 weeks.

3.      “Wait until your story is complete and available on e-book before you begin putting it on Wattpad, and don’t just publish on Kindle.”  CHECK

I went above and beyond in this department. I waited until my series was complete before posting the first book chapter-by-chapter.

4.      “Each time you upload a new chapter of your story, include a short reminder to readers that, if they can’t wait to find out what happens next, the completed e-book is available for purchase.” PARTIAL CHECK

You can’t put links inside the chapters, but I could have added the purchase link in the comments underneath each chapter, which I didn’t do. Instead, I referred people to my profile which has the purchase links for the entire series. When I posted the final chapter, I included a message to the readers with a book blurb for the next two books in the series.

Did I mention that I posted a chapter every Friday?

6.      “Be patient. Building an audience on Wattpad can take time. Post links to your Twitter and Facebook followers (and any other social media you’re on) to let them know you’re offering a free read.” NOPE

I didn’t do this—but it was a calculated decision. I was aiming to find a new audience for my books, not an audience I already had access to via my social media followers. This advice is a little tricky to follow for an author who is already published. 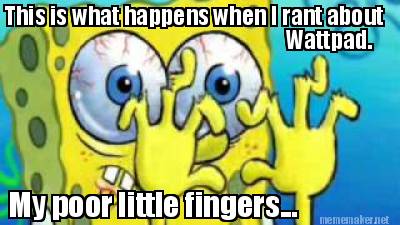 8.      “Reach out to Wattpad itself (contact information is on their Help page). The people behind this app are enthusiastic, incredibly helpful, and all about promoting authors. They may be able to include your story as a Featured Read or in other promotions.”

I applied to be a featured story twice and was turned down. I think this is THE make or break moment for anyone on Wattpad. You need the boost of this promotion because there are just so darn many stories that it is hard to gain attention. It’s like getting the elusive BookBub deal that can change things immensely in terms of sales. And this is a notoriously hard to find portal. You need to go to the help center for the application to be a featured story. Here's the link to simplify your hunt.

I decided to try one more time to be chosen as a featured story and received this message from Wattpad on 7/19/2017:

There are some changes coming to the Featured List to help update it and make it even better at promoting content across Wattpad.

With these two changes comes an end to the application process. We understand that for many users, this was a confusing process and for others, it wasn't easily discoverable. We will be selecting stories across Wattpad to feature. While it may not guarantee you will be featured, if you would like to help us find you, just tag your story with #featured.

So there's no longer an application process, but all I have to do to indicate I am interested in being featured is to tag my story with #featured. (big sigh) FYI --  There's a limit of 20 hastags for your story -- so deleting one of those that actually makes my story more discoverable to readers is not fun, especially when I'm replacing it with this hashtag which likely has no hope of getting my story featured. I am curious what these new "rules" will be.

9.      “Make sure you’re putting up a quality, professional product.” CHECK

My book, having been published already, had proper grammar, editing, and an engaging cover.

Another successful Wattpad author, Rowena Wiseman, had similar hints on how to gain readership on Wattpad. Her only addition to the previous list was including a call to action at the end of each chapter, asking the reader to please vote for the story. She also further explains that you will likely not be a Featured Story if you don’t have a fair number of likes/followers already. This creates a rather difficult-to-overcome catch 22. Can’t be featured if you don’t have the votes. Can’t get the votes if you don’t have the feature.

And, finally a more specific tip on targeting the most popular authors in your story’s genre makes a lot of sense. This author explains that he gained readership by leaving an insightful comment on top-ranking authors’ stories. Many of these authors then read his story and some voted for it. These reads and votes re-post automatically as notifications to that authors many followers on their public feed, gaining this new author a broader reach. I DID NOT DO THIS, BUT I STILL CAN!  I like the specificity of this tip, rather than the broadly overwhelming tip to engage with other writers and readers. I was not looking for a place to “play”—I do that on Facebook and Twitter to some extent. This is all about market share for me, and while this may be contrived, this is an instruction/hint I can work with.

My story is considered young adult, so I listed it in the over-saturated Teen category on Wattpad. Today, I switched the category to Paranormal. I may leave the full book up for a few more weeks just to see if this makes a difference. To be fair, a lot of the most popular stories on Wattpad aren't in either of those categories--they're in fan fiction. While my story deals with stone circles, it’d be quite a stretch and probably unwisely raise expectations to call this Outlander fan fiction . . . I have no time travel and this stone circle is set in Ireland, not Scotland. I’d probably just tick off readers by attempting to lure them in this way, so I’ll steer clear of that.

I have also entered the Watty contest for 2017. There isn’t an official entry form or anything. You merely add the keyword “#Wattys2017” to your story tags and are part of the contest, with the hope of gaining more attention. So far that isn’t working either, probably because EVERYONE that has enough of their story complete does this. (And again, this requires that you eliminate a story subject hashtag/keyword as part of your 20 allowable keywords to make room for this Watty contest hashtag.)

I might not give up just yet. I'll see what the reaction is to the new featured story system and see if switching my category to paranormal makes any difference. I will also spend a little time commenting on top-author's works and see if that builds an audience. If any of this pays off, you’ll all be the first to know!

Thank you for making me smile :-) Yes Wattpad isn't really a place to nurture new writers, or even established ones. Kids don't learn how to write, they learn how to game the system. Or even worse, how to take promotion to super toxic level. There seems to be a belief that gaining 100,000 clicks on a One Direction fan fiction gay fantasy, will get it published :-)
That said, I have met some talented and gracious young writers. One 19 year old girl came to my rescue when I was getting beaten up by the 'Harry Styles' gang LOL I have gained a few new loyal readers for my books.... But I do recommend putting your promo work on your own website. You decided the format and there are none of those really annoying Wattpad adverts.

Thank you for your post. I just saw that my work was the only one that didn't get featured on the undiscovered profile of Wattpad, so I relate to this.

The trick is definitely to keep writing, however, it is disheartening to see so many cliche books get attention while some great work does not get recognized.

Good luck to you. May you get the success you deserve as a writer.